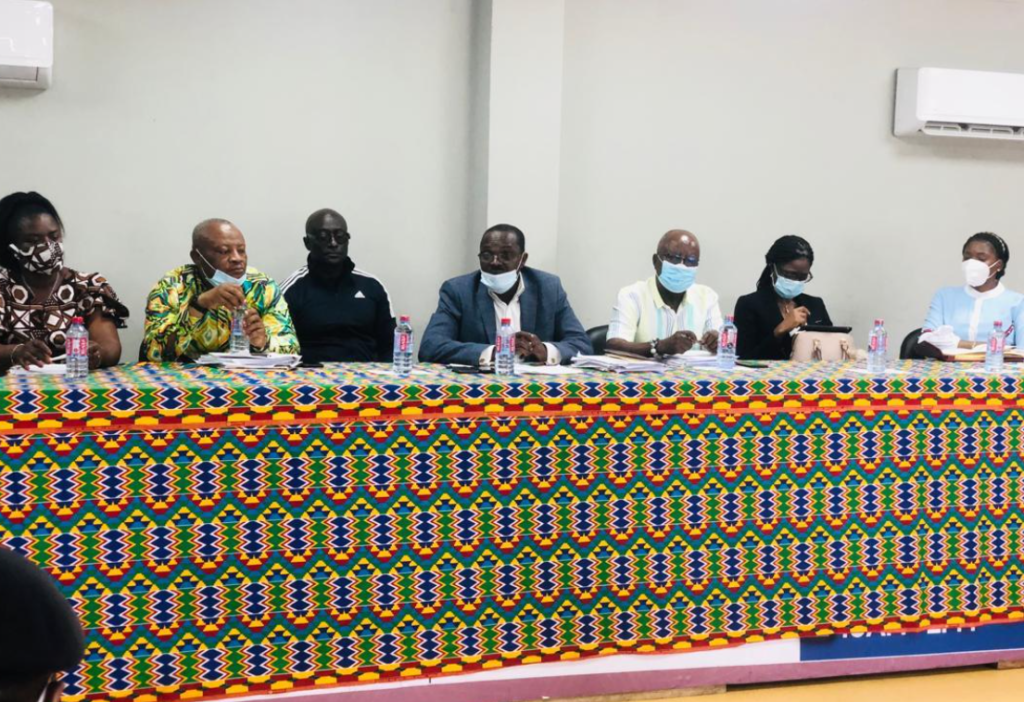 In his introductory remarks, the Chairman of the LOC stated that “this meeting is important to me and my committee because the task ahead is to restore Ghana to her former enviable position in sport”. He explained that the LOC could only achieve its objective if it sung from the same hymn sheet as the Federations. He assured the Federations that the LOC was ready to work hand in hand with them. He then handed over the platform to the Chief Operating Officer (COO) of the LOC- Dr. Emmanuel Owusu-Ansah to address the federations.

Dr. Emmanuel Owusu-Ansah started by appreciating the hard work of the Federations over the years. He acknowledged how some of the heads of the federations used their own pocket money to run the Federations and develop their respective sports. The COO also, gave a brief history of Ghana’s participation in the African Games. He emphasized the need to improve the performance of the athletes in order to win more medals for the nation. He stated that Ghana was aiming at placing 5th on the medal table at the 13th African Games and he believed this could be achieved.

Dr. Emmanuel Owusu-Ansah said that Government was putting in all efforts to achieve this target. He informed them government was building world-class sports infrastructure all over the country in a bid to enhance talent discovery across the country. He added that “Team Ghana” must be ready by 2021 and the athletes would be given the necessary support to prepare adequately in order to win more medals for the nation.

The COO said that Government had started putting plans in place to sign protocol agreements with some developed countries to have Ghanaian athletes train there. He was hopeful that the Olympic Stadium Complex for the 2023 African Games would be ready by the first quarter of 2023.

He concluded by tasking all Federations to prepare a Blueprint for their preparations towards the African Games 2020. He further hinted that the LOC would develop a guideline to assist federations develop the blueprint/ roadmap by the end of November, 2020. He assured them that the LOC would support them to implement their plans towards winning more medals for Ghana.

After the addresses by the Chairman and COO, the representatives of the federations were given the opportunity to ask questions, seek clarifications, make contributions and offer suggestions.

Mr. Ben Nunoo Mensah, President of the Ghana Olympic Committee (GOC) commended the LOC for recognizing the federations as a major stakeholder for the successful execution of task ahead.

He gave the LOC the assurance that with the support expected from Government, the federations would deliver exceptional performances during the event. He appealed to the LOC to push to make the 2023 African Games an Olympic Games qualifier.

Mr. Frederick Lartey Otu, President of the Ghana Taekwondo Federation (GTF) also, called for the involvement of local referees and training of administrators. He mentioned the need to promote local referees and umpires to the international level so that Ghana could have representatives for officiating during the Games.

The President of the Netball Association of Ghana applauded the LOC for their efforts. He suggested that the federations be included at the initial stage of policy planning and infrastructure development for the Games.

On the controversial issue of hosting of the First Paralympic Games in Ghana, the COO informed the Meeting that the Government had the authority and capacity to take a decision on it.

Concerns were raised about the conduct of athletes, the need for medical laboratories and mental health tests and equity in the disbursement of funds to national federations.

The representatives of the various federations were optimistic that the meeting would not be just another talk shop and that the LOC would truly act on its word.

Other members of the LOC contributed meaningfully to the meeting by reiterating the assurance given by the Chairman and the COO to involve the federations and keep them up to speed in the organization process.