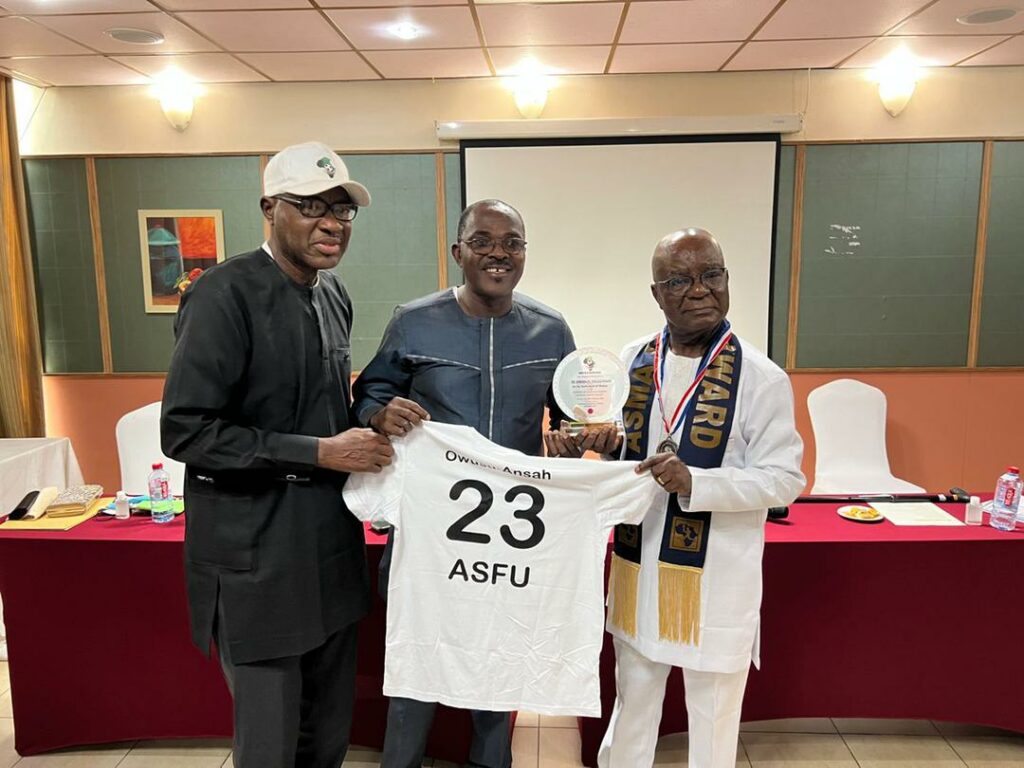 The African Sports Management Association has honoured the Chief Operating Officers for the Local Organising Committee of the 13th African Games for his outstanding contribution to sports management in Africa.

The hall was filled to the brim, The attendees were from Ghana and beyond, The reason was simple.

A son of Africa and Ghana, whose contributions in the development and promotion of sports were recognized by an international sports organization called Africa Sports Management Association.

He was a recipient of a gold award for his dedication, commitment, development, and energy-sapping success in sports and his contribution to the Youth of Africa.

Dr. Emmanuel Owusu-Ansah was honored alongside the president of Gambia. His credentials as revealed were catchy, exemplary, and apt.

A founding father of the University of Ghana Sports College, a former Director-General of the National Sports Council now an Authority, Director of the Winneba Sports College, an Author, and a former Technical Advisor to the then Youth and Sports Minister, Hon Isaac Kwame Asiamah.

He is the current Chief Operating Officer of the Local Organizing Committee of Accra 2023.
Dr. Owusu Ansah has touched many lives.

He has developed numerous souls, it wasn’t surprised when one of his trainees or students from the University of Ghana performed a soul-touching poem dedicated to him.

Loads of testimonies were said about him. From academia, sports journalists, legal, and all.

His family is led by his adorable wife and three of his children.

Among the children, was the only daughter who holds a Ph.D. in Mathematics.

She is also a senior lecturer at the University of Education, Winneba.

His colleagues on the Local Organizing Committee of Accra 2023 led by its Executive Chairman, Dr. Kweku Ofosu Asare were well represented and also gave touching testimonies of the celebrant.

The simple but impressive program was described by the guests present as lovely, revealing, and fascinating.

Dr. Owusu Ansah has earned the accolade of a sports icon.

We love, cherish, admire and revere you.

We thank Allah for this success and honour brought to our country.